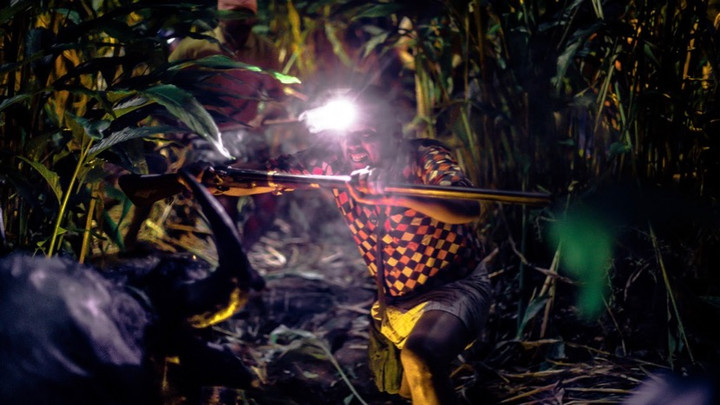 Screening at the annual BFI Festival this October is Jallikattu, a thrilling, nightmarish ride into the depths of human bloodlust, finds a rampaging buffalo hunted by a violent mob.

Kerala’s bad boy director Lijo Jose Pellissery returns with his darkest film to date. The inhabitants of a village find themselves increasingly addicted to red meat, placing both butchers and abattoirs in high demand. In a bootleg slaughterhouse, a buffalo fights its would-be executioners and escapes, wrecking a local neighbourhood as it flees. A group of men, led by butchers, set off to hunt down and kill the animal, but it constantly eludes capture. As more join the hunt, a repressed collective consciousness, fuelled by greed, lust, distrust and vengeance, erupts with wild ferocity. The boundaries between man and beast disappear, replaced by an orgy of extreme violence. This rollercoaster of a film, slickly shot, paced and acted, compellingly explores the dark heart of human nature. (Cary Rajinder Sawhney)

ADDITIONAL INFORMATION
This is a 18+ screening.